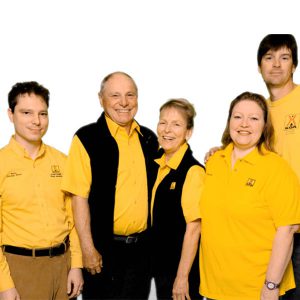 This year the Peter Warrick/Wayne Morris Award goes to the Kippschull Family of Fort Collins/Lakeside KOA who significantly raised their contributions from $1,303 in 2017 to $10,931 in 2018, an increase of $9,628.

Guenter immigrated from Germany to Chicago as a young boy. He originally owned and operated the bowling alley and pool hall in Chicago which was featured in the 1986 Paul Newman/Tom Cruise blockbuster movie “The Color of Money”.  After selling the bowling alley/pool hall, they signed their first KOA franchise contract for Fort Collins/Poudre Canyon, CO KOA in February 1988.

The entire family is involved in the operations and are very hard working, hands-on operators, including Guenter, himself, on his hands and knees laying pavers for a patio site in the dead of the Colorado winter.

They have always been VERY generous with Care Camps and that is why they are so deserving of this award.