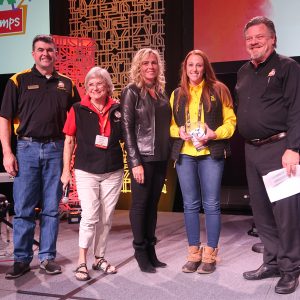 The award is given each year in recognition of Achievement and Growth in Care Camps participation and for outstanding effort in having the largest year over year increase in financial support to the Care Camps program for the entire KOA system.

This year’s award goes to a park that was opened in 1973 and remains one of the oldest KOA Franchisees that is still managed by the same owner/operator family. This campground has been a generous and long-term supporter of Care Camps.  We are forever grateful for their involvement in the charity.

Would Melissa and the staff at the Savannah South KOA please join me on the stage.